Some History of what we have achieved

The name was trademarked in 1996 by a Glasgow businessman and when it was put up for sale in 2002, it was purchased by two supporters determined to preserve its integrity and prevent it being sold as a marketing tool to an English newspaper or a German sportswear firm.

To date, they’ve used the name to raise tens of thousands of pounds for good causes - including £53,000 for the BBC’s ‘Children in Need’ charity via a live recording of “Loch Lomond” with the “Tartan Army” at Hampden Park, Glasgow and the band Runrig.

www.tartanarmy.co.uk was launched in 2019, is based in Scotland and is supplied by Scottish companies.
The new rebrand took place in 2021 during the Covid19 lockdown.

The expansion of international fixtures in the 1970’s and 80’s coincided with the arrival of affordable travel – and soon the “Tartan Army” were on the march to foreign soil.

The first recognisable foreign legions travelled to Germany and Argentina for the FIFA World Cups of 1974 and 78.

Their numbers swelled for FIFA campaigns in Spain 1982, Mexico ’86, Italy ’90 and at Scotland’s last World Cup finals appearance in France in 1998, the “Tartan Army” numbered over 15,000 travelling supporters.

They also followed their country at the European Nations Championships in Sweden 1992 and England 1996.

And along the way, they have collected a host of awards for their behaviour, their passion and various charitable activities.

It’s now used by Scots across the world as proud badge of association with Scotland, its heritage, history and culture.

As one commentator summed up, “If the sound of the bagpipes makes the hairs on the back your neck stand up – you’re in the Tartan Army!”

“Tartan Army” is the generic name for Scotland’s football supporters.

It was used by London journalists to describe the tens of thousands of tartan clad Scots who arrived in the English capital for matches against the ‘auld enemy’ at Wembley.

The passion, pride, noise, colour, excitement, humour and friendship that travels around the world with them, is simply legendary! 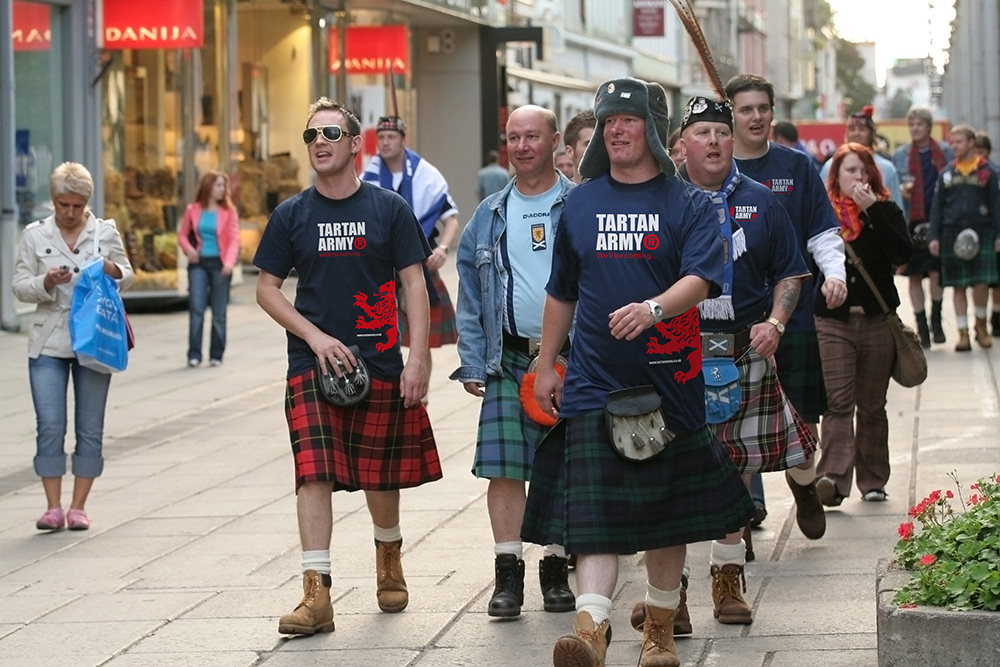